A FILM BY Louise Osmond

A FILM BY Louise Osmond

Synopsis / Credits Trailer Press Kit Buy Now ITunes Download Poster Download Video
A heartwarming true story that has been expertly crafted into an irresistible, emotion-charged documentary.
-Allan Hunter, Screen Daily
What makes the film so much fun to watch is not only its clear underdog narrative — the story's only halfway told by 2007, with several more surprising twists in store — but also that the no-nonsense commoners are such pleasant company
-Boyd Van Hoeij, The Hollywood Reporter 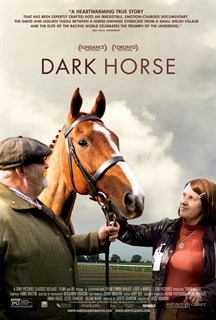 Set in a former mining village in Wales, Dark Horse is the inspirational true story of a group of friends from a working men's club who decide to take on the elite 'sport of kings' and breed themselves a racehorse. Their young foal, raised on nearby waste-land, grows into an unlikely champion, beating the finest thoroughbreds in the country, before suffering a near fatal accident. Nursed back to health by the love of his owners - for whom he's become a source of inspiration and hope - he makes a remarkable recovery, returning to the track for a heart-stopping comeback.