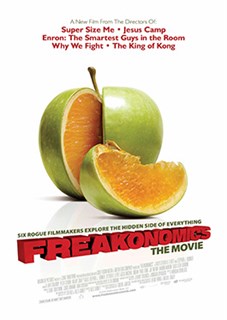 In 2005, economist Steven Levitt teamed up with journalist Stephen Dubner to bring us the best-selling phenomenon “Freakonomics”, a revelatory investigation into the hidden side of everything that introduced us to a new way of understanding our world. Now, six rogue filmmakers behind some of the most acclaimed documentaries in recent years have brought Levitt and Dubner’s groundbreaking vision to life, compiling a series of fascinating, visually arresting and often hilarious case studies that prove the key to unlocking the mysteries of everyday life lies in one very important question: what’s the incentive?